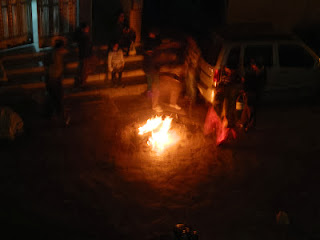 Today is a very special day in Indian history especially of Punjab or I must say almost entire north India. A Punjabi folk festival  also popularly known as the agricultural winter festival celebrated one day before the most auspicious day known as 'Makar Sankranti' i.e. on 13th January.

Everybody gathers around lit fire celebrating Lohri by singing, dancing, playing around fire like in a fire camp. It is considered to be longest night of Winter solstice. The most important aspect of this festival is that it is celebrated to thank god for the good harvest of the Rabi crops. In addition to all this, it also marks its importance as the financial new year by all especially by Punjabi farmers.


One can very well see all celebrating Lohri amidst the bone chilling winter season. One can also expect small children arriving at their doorsteps to ask for money or you can call as 'Lohri loot' which can include jaggery, peanuts etc. besides money as a remarkable feature of this festival. The main praise of this auspicious festival goes to 'Dulha Bhatti' by the name of which all people sing the songs during the bonfire festival.

According to the legend, Dulha Bhatti was a Punjabi who lived in the time of Mughal Emperor Akbar. He was like a modern day Robin Hood for the poor clan in Punjab. He looted the rich to help the poor for which he became famous. All offer several things like rewari, peanuts, Jaggery, Popcorn to the bonfire after which the Bhangra dance starts (for men) and Gidda Dance (for women).

Finally, the conclusion about this auspicious festival as to what I feel is the magnetic power of it to force people in this not that so much busy world to have a get together  along with a thanksgiving to  which I think is very important for us all. Moreover, also this festival is for thanking gods for the good harvest for which we ultimately work for.
I wish you all from my side a very happy Lohri with a hope that this prestigious day bring happiness, peace and prosperity to each and everyone's life for which we long.