Holoshop - the new way of shopping

It was the year 2030. The metro cities have turned into a metallic forest. The major cities housing multi-storied edifices that included everything one would need for a living. The flyovers, freeways neatly form a web around the skyscrapers. Everything planned and designed keeping in mind the needs and wants of people. Technology has advanced to a level which seemed impossible to accomplish few years back. The research and development played the major role in developing cities of everybody dreams.
Ayaan, a twenty year old jovial guy was enjoying by playing his favorite video game on his play station. The time management app on his latest iPhone made his life a lot simple. He could play games, study, hit the gym and do everything he want in the same day. Shefali, his girlfriend was cat-eyed, milk white skinned beauty.  The alarm beeped and the Play station was shut down automatically. Ayaan was now getting ready to meet his love.  Clad in a Tommy Hilfiger’s grey sweat shirt and Levi’s denim jeans, his lean body gave a killer look. He was clean shaved except he donned a soul patch beneath his lower lip. Gosh! I will be late again today. Shefali’s going to kill me. He picked his bike’s keys and strode out of the house. She was waiting for him at the campus gate after her class got over.

“You are late again. Huh!” She asked irritatingly. “Sorry dear!I was just about to come but I was at a very interesting point in my game.” He said excitingly. “You and your silly games. When will you grow up?” She asked, irritated. Mom is right, all men are same! “So where you want to go today?” Ayaan wanted to change the topic. “We are going to meet Prof. Chaturvedi in his lab today. “Not again. Is this a punishment you are giving me for coming late today?” He asked as he put the bike on first gear. “Umm…yes!” She winked. She loved to tease him. Ayaan hated her studious attitude. All girls are the same. They always spoil a date!  Anger was welling up in him but he tried to stay calm. After twenty minutes of drive in silence, they reached Prof. Chaturvedi’s laboratory.

“Welcome Shefali.” Prof Chaturvedi greeted her in his laboratory. It had a cave like entrance but when one entered it, it appeared to be world’s most advanced place technologically. On the left were huge robotic machines doing some work but it appeared as if they were dancing to some kind of rock music to Ayaan. In all, it seemed like he entered into a mechanical jungle full of robots. He saw Shefali engrossed in something with the professor. Prof. Chaturvedi was a big fan of Sir Albert Einstein. He was so much fanatic about it that he spent two years in getting a look like him as well. He trimmed his moustache to look similar to Einstein’s moustache. He had same rugged up hair like his. For few minutes, Ayaan was confused on seeing him. Albert Einstein. But he died in 1955, seventy five years ago. Either this man is not Einstein or Einstein was genius to come back in a form of Prof Chaturvedi that too after seventy five years! Ayaan brushed away the thoughts that clouded his already wavering mind. He saw Shefali and professor talking about making some things simple for people. “It’s a breakthrough in technology which you have achieved, professor.” Ayaan overheard them talking. "What will make things simple for people?” Ayaan almost whispered as he saw a small pebble like, oval shaped device. It appeared to be made of some metal either titanium or stainless steel.

“It looks like an igloo.” Ayaan laughed his heart out as he held the device in his hand. It had a rectangular lens like thing in front with a crimson light hiding behind it. “Now if jokes are over can you please return the device to me?” Professor Chaturvedi extended his hand to take back the device. “Have you named the invention professor or not still?” Shefali asked excitingly. “Of course my dear. It will be called Holoshop.” Professor said with pride. Ayaan was still very confused about what the two geeks were up to. “Will you explain what this thing does?” Ayaan asked. He was a bit freaked out by seeing things which were appearing awkward to him. 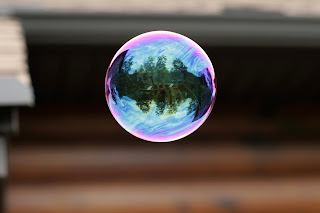 “Yes sure but before that I want you to tell me your favorite place to shop in the WORLD?” Professor emphasized more on the last word. “What are you talking about professor? Are you serious? You are talking about the world and not India?" Ayaan was becoming aggressive now.  “Oh yes I am sure dear. Just tell m…” He was interrupted in between. “You sure are kidding professor.” Professor Chaturvedi stiffened. “Okay I would love to shop at 1 Utama in Kuala Lumpur.” Shefali said excitingly. Ayaan didn’t believe that Shefali was actually getting crazy for some stupid invention. “All right then, I will be sending you to the world’s fourth-largest mall.” Sending! Is this guy nuts? Ayaan was furious now. It was apparent from his bloodshot eyes. After few minutes he saw Shefali was sitting comfortably on a chair which had a vertical stand attached to it on which headphones were rested. Professor Chaturvedi made her wear some type of glasses which covered almost half of her slender face. Then he typed something on the laptop placed on the table just in front of the chair. Ayaan was watching all the things in amazement. It was something different for him which was beyond imagination.

He saw Shefali making some kind of gestures as if she was having a feel of something. She had a smile on her face. After some time she returned back. In the meanwhile she was constantly in touch with the professor. Ayaan helped her to get up from the chair. “I simply loved the place. I want to go back again Professor.” She pleaded like a little girl asking for chocolates from her father. “I am fixing on the time issue, my child. When it will be fixed, you will be able to stay there for longer.” Professor said chuckling. “Will anyone here explain me what happened here few minutes ago?”  “I will explain.” Chaturvedi said. “Think of any place where you would like to go to shop something and this device will actually take you there.”
Ayaan stood there, his mouth open in surprise. “But what’s the use of simply going there? The things can actually be brought online using eBay.” He said, coming back to his senses. “That’s right my dear, but imagine you can feel the product before buying it and moreover you will be aware of prices on the world level.” Chaturvedi said as he fixed his glasses. “I am still working on the time constraints and I will be extending the functionality so that a person could even buy from his or her favorite destination without worrying about the distance. Its a major breakthrough.” Professor’s chest bulged with pride. “How does it work professor?” Ayaan asked holding the small igloo type device. “Well it is a bit complex. Firstly, you have to input the where you want to go for shopping. It will be done from the huge database which I spent years in developing.”

“And then?” Ayaan asked impatiently. “ Ah! Then this small igloo thing as you call it will create a holographic like  image of yours at the place you selected.” He coughed a little. “In short, others will be able to see you but it will not be actually you, but your projection. You will be able to interact with the people, talk with them, touch things, feel things.” There was silence for a while. “I am listening!” Ayaan indicated professor to continue talking. “I am working on the time issues as well as building up a system by which a person would be able to buy things virtually in the real world. Also, it will be possible to know prices around the world like ebay.in check does.” Ayaan was getting impressed by his words. He knew that even at present day, people can buy online which implied virtual shopping in real world but the invention was truly worth the praise.

They both thanked Professor for showing a brilliant invention with them and left the place. Holoshop became the new way of shopping in the year 2030.

This post is written for the contest ‘The future of shopping’ at Indiblogger in association with eBay.in. Do check out the cool ebay.in Check  GOOGLE CHROME EXTENSION here.