How I saved my sense of smell!

By Saurabh Chawla March 31, 2014
In our lives, there comes a point when we have to deal with someone we wish we wouldn't have met ever. I am no exception to this rule. In fact, I have come across many of such people. I will tell you my story of how I dealt with one of such situations.


I was doing some work on my workstation in my office. Usually we keep air fresheners in case of an emergency of some pungent smell that might be a reason to burn our nostril hair. It happened accidentally that we need an air freshener in office as once it happened to be a smell of a dead mouse which literally gave me a feeling close to a person dying of choking when I sat on my chair. I have a colleague who has an obsession (I call it so) of wearing a garment he purchased till it is reduced to threads. This thing was okay for me till our seating arrangement was changed in the office. I was deliberately forced to sit with him as he was a member of our business development team. I used to shout, scream and do whatever I could do to return to my previous seat as it was comfortable for me, but all in vain.

Now, this person's personality was a magnetic one but in an opposite way. In a magnet, it attracts everything and anything in vicinity, but in this case it was probably a repellant one. One day I was sitting beside him, I had a strong desire to puke. He was dressed in a brown leather jacket which he purchased around 3-4 weeks back from then and he was wearing it constantly on daily basis. The best thing which made it worse was that he hadn't taken shower for ages (I guess). I asked the peon of the office to keep a spare air freshener for me at my desk so that I will use it in case of emergencies, literally. When all the boundaries were crossed, I along with my friend made a plan of letting him know that he is becoming pervasive day by day because of his filthy unhygienic lifestyle. I was afraid at one point that I might lose my sense of smell. Even a dead mouse will die again if he also smells him. Eww. 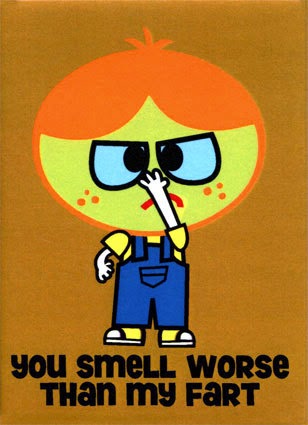 Image source: here
One day he sat beside me as usual routine. I looked at him smilingly, carefully fishing out the air freshener spray from my desk drawer. He looked at me as if I have stifled him but he was soon going to realize that not me but is making us stifled in the office. 'Why you keep air freshener all the time with you?' He asked meekly. I bounced back at him without thinking too much, 'Sometimes I need it.' I sprayed some in the air. Then he asked something which made me laugh from inside incessantly. 'Don't you take bath?' I was staring at him for a while. It happens that I take bath sometimes in the evening but never skip it.  I turned back to him, 'I have taken bath and do it daily.' I was a little bit angry as I was getting almost near to unconsciousness with the stifling. 'If you don't mind, can I ask you one question?' I asked him meekly. He looked at me as if I have asked him for money. 'Sure. Ask, ask!' He gave a nod. I was wondering whether to ask it or not, but in order to prevent this pervasiveness in future, I continued. 'Since when you haven't taken bath?' He was literally now staring me as I stole his money. With exaggeration, not ready to give up, he said, 'I have taken bath today itself. I do take it daily.' I went a little close to him, bent a little and asked, 'Then what's that smell, Boss?'

That day he realized his perception of himself being projected in the office. But still after this question, all that changed was my seat and not him. Someone has truly said, you can only change yourself not anybody else.

This post is written for the contest hosted by Indiblogger and Racold. Don't forget to check the link here.

That's my story of how I dealt with a smelly person that came into my life. What's yours?