Silence of the night 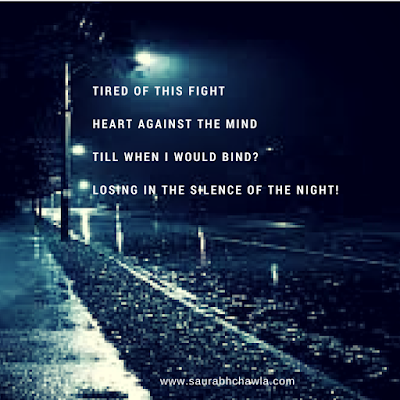 One cold December night in the year 2014, the rain washed out the roads off the dust. The wind was chilling to the limit that the bones were brittle, the limbs shaky. Under the dark sky, a woman, in her early thirties was pacing down the deserted street. She was already late for home. The worst  part was that her car broke down in the middle of street as soon she left from office.

At the wee hours, it was difficult to find public transport as well. She passed several T-points and could find no sign of a person except a rare view of few cars. Maybe they are returning from late night parties or probably some wedding. She kept walking for her home that stood a few blocks away. After walking for about ten minutes, she took a sigh of relief as she reached to enter the gate. Finally I am home!

Under the white light that came from the front gate she felt a shadow of the car that grew big as it came nearer to her. She turned around to find a black sedan that slid near her slowly and silently. Somehow, the car seemed familiar to her. She walked towards it. She squinted hard to see across the tinted glass. Her vision was already weakened by tiredness and fog that blanketed the night. As she drew near the driver seat, the window slid down a little. A muzzle with a silencer was pointing towards her. Till the time she was able to recognize the driver, it was too late. A shot was fired. The window was pulled back up and the car took a reverse direction. She watched it disappeared in the night.

The last thing she remembered was a red spot that grew wide every second on her golden brown jacket and a loud scream which no one heard except her.

About five miles away from her home, a call was made by the driver. "The work is done!" He heard from other end. "Hmm!" In the middle of the call out of nowhere, a speeding truck collided with the black sedan crushing the car along with him at the spot. The last thing he heard was a laugh from the other end.