So, you have failed. Really? 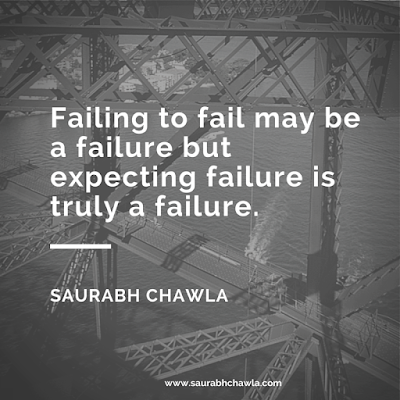 Failure, the word in itself is bound to bring too much negativity. Yes, it can bring in so many negative thoughts that you can't even imagine. A minute failure can bring down your self esteem to ground zero. Putting salt and pepper on your failure, the people living around you would take pride in it. Imagine a scene when Satan laughs on the pleading, innocent people having no mercy at all. Yes, that would be the scene you are into. You would be saying sorry, asking for another chance which you will get, but with reduced self confidence. The chances of failing again, they are more than ever before!

What is this failure by the way? Different people have different versions of the same. 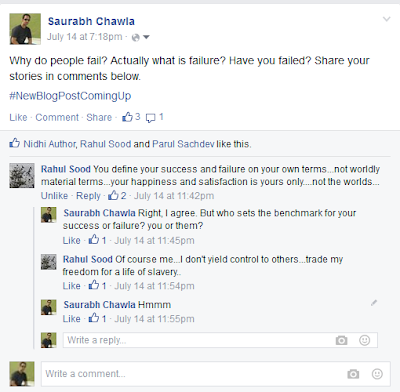 For everybody, there are separate reasons, separate definitions of failure. That's perfect. What matters most is the benchmark set for the failure to happen. The following example illustrates this with more clarity.

You and your friend are studying in same class with same subjects. The difference is that you are an average student but your friend belongs to that top creamy layer. The results are about to be declared. You wished you only pass the exams you would be happy. Your friend's wish would be to get 1st position! The results are announced after some time. You failed in one of the subjects  (which is okay with you as you knew about it :)). Your friend, on the other hand got slightly less marks as expected. He/she lands at second position instead of first. What you get from this example?

You both failed, right? The difference is that the definition of failure for you is different and for your friend is different. In your point of view, your friend has passed in flying colors. His/her point of way tells another story. Now, let's come to the point of who all would be affected besides both of you from your results.

2) Your relatives: They are the most interesting people in your lives. No matter what you do, they follow your actions like a detective. They may or may not be aware about their kids' result but would be more than excited to know your result.

3) Your friends: They would definitely compare the marks in selected papers. They will be like, "You know I got an A in maths, A+ in science. Yours is a B." That words which will pinch you like needles.


Failure or success isn't defined by any benchmark. It is defined precisely by the amount of effort put in and willingness to pursue something.


Failure is something which has no set benchmark. In my above said example, both of you have failed but in fact none of you have failed actually. Failure says that it's time to start working in a different manner. Everything in this world has an approach which needs to be followed. The steps which needed to be executed one after the other, in the defined order. If you don't do that, you fail. That also, I wouldn't say you failed. I would say, you skipped a step.  So why do people fail? What's the reason of their failure?

I would summarize my observations on the same:

This is the most relevant answer to the above question. I failed in my engineering a hell lot of times. Sometimes I faced situations  where I had to give ten exams in a row (five from regular semester exams, five from backlogs). The best part about it, one exam from 10 AM to 1 PM and other exam from 2 PM to 5 PM same day! That's two exams daily for five days, totaling to ten exams! Yes. that's how I cleared my engineering :D.

Now, I have seen many students committing suicides. Why? Because they were not able to clear the exams. What the ......! I would like to ask them one question, it doesn't matter wherever they are, hell or heaven, "Why did you commit suicide? If you did it, how come you didn't fail in committing suicide?" I am sure they would be discussing about it on their social networks by now.

The point is, they quit. Exams are temporary in life. Exams are like a small drop in a huge ocean. They cannot be a benchmark of defining success or failure, EVER.

That's correct. People feel like they sit at home and they would get a million dollars credited to their account. That's called giving nothing to have everything. That's opposed to law of our mother nature as well. You have to give something to have something. It all depends on effort you have put in to achieve success in whatever you are doing. Again, that depends on how much you want to achieve. You have your own definition of failure, right?

The problem with you is that you tend to skip the steps in between. Shortcuts are tempting but often lead to a dead end. Everything has to have a process. Human body does not grow from a kid to adult in one day. It follows a well defined process in a structured manner. If you play with the process, you can see the consequences yourselves.

What we all are doing in this clutter is, that we are living on others' expectations of ourselves prior to our own expectations set by us from ourselves. It should be in the opposite order instead. Right?

Failing to fail may be a failure but expecting failure is truly a failure.
- Saurabh Chawla

Now I would like to ask you, "Have you failed, Really?"

Don't forget to share your story in the comments section below! If you have any questions, feel free to drop in a message :)