Why 'Being Yourself' is much needed 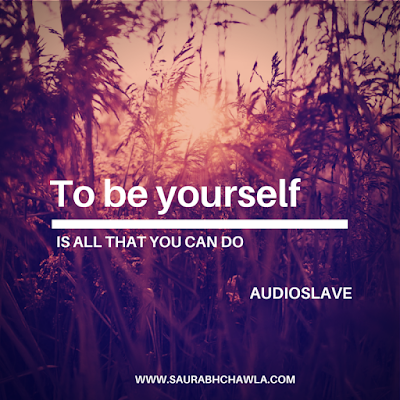 No one ever existed like someone else in this universe. Even identical twins have different set of fingerprints. Independent of all fears, lies and misunderstandings, being yourself is the most important aspect of life. You are unique in this universe, but that uniqueness is well acknowledged when you follow this rule. Fortunately, after being distracted by lots of voices from outside, I decided to be myself instead.

Oscar Wilde has said correctly with a one liner, "Be yourself, everyone is already taken."

A deep meaning, a true essence of you is reflected in these words. Embracing the life as it began, as kids we  all tend to behave as we like, got what we needed, played, laughed, kicked, feared nothing. As we grow old, our minds get conditioned to being judgmental in almost every situation that life throws at us. What happens with this? Knowingly or unknowingly, we start comparing ourselves with others, right? This is where problem starts. Being judgmental is good, but being judgmental in situations where it's not at all needed can create chaos in your life.

It comes with its own benefits and risks involved. The benefit is far more better than the risk in the long run. Let me tell you an incident which took place when I was pursuing my studies. A subject faculty didn't put my attendance despite I attending the lecture. Her excuse was that I was not able to answer her question correctly which she asked during the lecture. My concern was to simply deduct my marks or anything else but not to deduct my attendance as it would result in me getting debarred from sitting in examination. The worse was that it was not my fault at all. I politely asked her to update my attendance but she refused. After a lot of argument, suddenly she burst out, "Do you do any favor if you come to class?" What would you reply to her in this scenario. I am sure most of you would stay quiet and leave after a failed attempt.

I also thought the same at that moment. The very next moment, I burst out, "Do you do any favor to teach us?" Now imagine the scenario I had created. Yes, a scene was created within two minutes. When she didn't have any answer, she threatened me with names of the head of my course. I smiled from inside and said, "I can go to the head of my university If you want me to take me to the owner of the university, I have no problem with that either. But can you show me any rule written or somewhere I signed that you have the right to deduct my attendance when I am present in the lecture?" By now you would be able to guess the look on her face. These questions were not intended to hurt her feelings neither they were intended to be like that, but I was tired with such people to whom I had to justify myself with no valid reason.

In the above case I might have stayed quiet, the result of which would have been a disaster to my career. I decided to be myself. The result was that she credited back my attendance and I was provided with a A+ grade (more than ninety percent marks) in that subject. From this very own experience, I  took note of three key take home points which I would be sharing with you all. You can also regard them as benefits of being yourself.

1) It makes you courageous:

“The opposite of courage in our society is not cowardice…it is conformity.”
~ Rollo May, Man’s Search for Himself.

As you have seen in the above example of my life's incident, being yourself truly makes you courageous. This is due to the fact that at that instant of time, you have only one thing in mind, "What I have to lose?" No fear is greater than the fear of losing something! This one fear can make any one paralyzed. When you decide to do it your way, you know that you are right.


People often tend to forget the lies they have told to someone they met earlier. That lie is due to the fact of them behaving as someone they are not. If you already show yourself as someone you are not, it becomes close to impossible to justify that personality of yours. So, next time you meet with someone and are tempted to pretend to be someone else, remember this point and be yourself instead. It may not benefit in the short run, but it will leave you with no regret in life (next point to be discussed).


The biggest regret when people die is that they didn't gather the courage o live their life according to their own selves. They ended up living up someone else's life instead. Do you also want to live that life? No!

Like the Audioslave say in their popular track, "To be yourself is all that you can do!"


So, do you live a life "Being Yourself?" Do share your story in the comments section below.