Bringing Back the Broken Pieces Together

Note: This part is in continuation. Please read first part, Why fear your own shadow?
and second part, Dim Haze of Mystery before reading this part.

Shrikant laid back on his chair as he pondered over all the recent series of events. It was already eleven-thirty in the night. Jadhav was about to join him in few minutes. He poured himself some neat scotch, whatever it was, something is not right, something is not right at all. He was taken aback by a presentiment. He was looking for a missing link in the case. He heard the doorbell. He went on swiftly to open the door. His movement was so brusque that he pushed off the glass off the shelf. 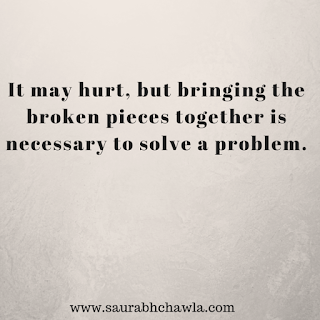 Jadhav entered the lobby of his home. "Come in, come in." Shrikant indicated him as he walked back into the kitchen. "Is everything all right, sir?"Jadhav re-confirmed. "Yeah, yeah, want some scotch?" Shrikant was belligerent. Jadhav sensed it. He hasn't seen the iron of a man melt like this since his last complex case ten years ago. Shrikant remained preoccupied as he collected the broken pieces of glass in a towel. Picking up two fresh whiskey glasses, he fixed the drink, on the rocks for himself and Jadhav.

Jadhav, being aware about the phase Shrikant was going through, couldn't stop himself. "Sir, there is something that is bothering you." Shrikant was hesitant. "You can share it." Shrikant took a sip of whiskey, frowning from the strong taste. Jadhav waited for him to arrive in the state of composure. After a while, Shrikant spoke up. "Do you see the broken glass pieces over there, Jadhav?" Jadhav nodded. "My life is not any different now!" Jadhav raised his eyebrow. Indeed his sense of something wrong turned out to be true. Staring at his inscrutable face, he enquired, "What's the point?" Shrikant rested the glass on the round table in front of him. "This case is a mess. And those media guys are leaving no chance to hamper my reputation." Jadhav got the point. It takes a hell lot of time and patience to get to a point where Shrikant stood. It takes a second to destroy it. "Pressure is mounting on me. If the case is not solved immediately, the consequences can be fatal."

Jadhav knew that the man who stood in front of him was not afraid of any consequences. All he was concerned about was his respect in others eyes. He can't afford a blot on his character or his ability to solve a damn case. Shrikant invited Jadhav in his study room, the place where they discussed the cases. Jadhav sat on a chair opposite Shrikant. The table was filled with the evidences that they have got so far. The intricacy of this case has led them to keep a close watch on every possible angle of the two murders. Picking up the picture that Jadhav clicked at Mohanlal's farmhouse, he gave a closer look at the verse that was written on the mirror:

Neither a crony, nor the enemy
But still holding the grudges
Hitting you by no bullet or arrow
Why fear your own shadow?
"What do you think about it?" Shrikant asked laconically. "I think our killer is a literature lover, someone, who is tempted by poetry," he reviewed the verse again and continued, "Seems like killer was someone known to him." He emphasized on the last line 'Why fear your own shadow?'

Shrikant reviewed the records he had in front of him. He was trying to fish out something. Jadhav interrupted, "What are we up to now?" Shrikant picked up a file and placed it open in front of Jadhav. "We have our suspect here. Jadhav held close the file as he scanned through a BA Degree in English Literature from the University of Manchester, UK. What surprised him was not the degree but the name of the one it was issued to. The name on it was Aaliyah.

While the suspense intrigued Jadhav, Shrikant could see the dim haze of mystery fading away. The shadow seemed to come out of the darkness. He looked at the broken pieces of the whiskey glass. All started making sense to him. The broken pieces were come together now.

Read the next part -------- Sometimes, you have to start from the beginning.