By Saurabh Chawla September 12, 2015
Note: This part is in continuation. Please read first part, Why fear your own shadow?
and second part, Dim Haze of Mystery, the third part Bringing Back The Broken Pieces Together, the fourth part Sometimes, you have to start from the beginning and the fifth part Silence must be heard before reading this part. 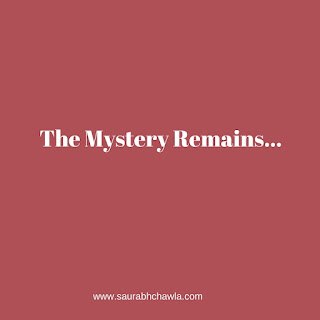 "I want you to keep an eye on both of them, Jadhav." Shrikant rose from his chair. He started walking. This is getting out of my hands now! Jadhav interrupted between his thoughts, "Sir, I guess we should look at the evidences once again deeply. I am sure we would find some connection between the two." This irritated Shrikant even more. He had gone through all the evidences several times. "Alright, you may go ahead with that. But before that, let's discuss the case happenings from the beginning."

"Mohanlal was found dead in his bedroom." Shrikant spoke up.

"The unusual thing we saw was that his daughter, Aaliyah was at home that time." Jadhav continued.

"One more thing, the car got stolen according to Aaliyah. It was found later though." Jadhav made the notes both mentally as well as on paper.

"The verse written on the mirror was the same that was written by Aaliyah in a play during her college days." Shrikant coughed. "Can you pass me the verse, Jadhav?" Jadhav picked out the verse and passed it on to Shrikant. Shrikant gave a close look to it again:

Neither a crony, nor the enemy
But still holding the grudges
Hitting you by no bullet or arrow
Why fear your own shadow?
"It seems that someone close to him is involved, but who?" Shrikant paused. He returned to his chair.
"Another event happened after that, the theft that took place at Aaliyah's house. The gun was gone, right?" Jadhav nodded. He registered the same on the notepad. "The gun was registered in the name of Mohanlal." Shrikant completed the sentence.

"One thing we missed, that person whom I shot in the knees. What's the status?" Shrikant took a sip of water. "We are on a lookout for him." Jadhav replied.

"Then Ishaan comes along. New character in the story! Aaliyah and he studied together in the same batch."

"Moreover, they wrote that play together, too." Jadhav said.
"This Ishaan appears fishy to me. Why do you think he came back?" Shrikant raised an eyebrow.
"Also, Aaliyah seemed to know him well. She was shocked to see him, you remember?" Shrikant nodded.

"I believe this Ishaan is the missing link which could help us." Shrikant took his photograph and held closer.

Jadhav sat there wondering what was going on Shrikant's mind. He was tired of all the things.

After scanning through the financial records of Mohanlal, they come across an important point. Mohanlal was paying the fees of two students. One was Aaliyah, other one was still unknown.

"This is what the issue was. We have to find the other student whose fee was paid up by Mohanlal." Shrikant remarked.

Jadhav put his point forward, "I have a serious intuition that this other person is none other than Ishaan."

Shrikant was suddenly hearing something. He realized that it was the silence that he left at Aaliyah's farmhouse.