How to turn your failure into your success? (Infographic) 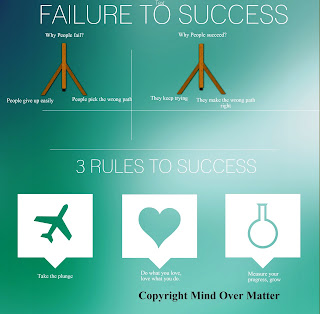 Why do people fail? In everybody's life, failure knocks door at least once. There is noting one can do to avoid it from happening. Be it studies, sports or business. Well if one cannot do anything about it, one surely can turn that failure into their opportunity for success. You might be wondering, how I am going to do this?
To understand it, let's understand why people fail first. We list below  few factors  which can lead to one's failure with steps on how one can change the failure to their success :
1. People take a wrong path:
By wrong path, it's not the wrong path in reaching their destination, but the destination itself. We often see people choosing wrong career paths, wrong goals, making wrong choices only to regret later on.
Solution: Instead of regretting, people should try to analyze their path. They should try different things which they love to find out their strengths and weaknesses. Then choose the one which they love the most.
2. People give up easily:
Lot many times, people choose their destination right but still fail! Have you wondered why? Because they give up in between. Sometimes, people give up just before their goal is about to be completed. The reason being fed up of time taken or maybe they change their mind because of several external factors.
Solution: You have a goal, a destination to reach to. Then you should not have a second thought about it. There are several influences outside in the world, some will push you towards your goal, some will pull you away from it. Try keeping away strictly from the latter one.
3. People have fear of losing:
Fear is something which every body has. Some have fear of being rejected, some have fear of being laughed at, the worst they have a fear of losing. Consider a scenario when a student fails in an exam , what is the worst he/she suffers except studying again for the same subject? Same is the case with fear of losing. One cannot win every time. If one wins every time, there will be no learning, no improvement.
Solution:  Overcome your fears by facing them. The simple rule is, if you run away from fear, it will come back to haunt you even more. Think about it this way, 'If I lose, what worst is going to happen?' and replace it by 'If I try again, I might win this time.'
Do try the solutions if you are facing from any of these symptoms. Share your feedback in the comments section below.