How to deal with failure

By Saurabh Chawla November 03, 2015
Failure is what everyone faces once in their lifetime. Many give up, few stand there staring failure in the eye. Failure is something which should be taken as a learning out of the process which you attempted.  One should figure out 'What went wrong?' Instead we always give up and move on to completely other direction. But those who keep on doing things differently rather than doing different things altogether achieve success. 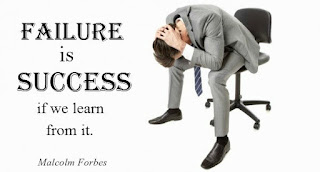 There are several ways one can follow to deal with failure and can still move ahead in his/her path. We are going to list some ways of dealing with failure. Keep reading for more.
1. Regard failure as a learning experience
People who are able to regard failure as not failure but as an experience, a learning come out to be winners. The reason  is that they fail, they learn out of it, change their way of doing things, and keep on repeating till they succeed. They don't compromise and get what they want.
Others fail, they change their path, move on to other path trying different thing by giving up on previous one and keep on repeating till they become consistently stable in one. They never achieve what they want, but start compromising with what is given to them.
2. Keep failing, keep moving forward
Take a failure as a stepping stone to next step. Identify the patterns, identify the loopholes which made you fail. For example if you have failed in one business, try to identify the loopholes and fill those gaps. In this way you will not make same mistakes if you eventually plan to start another business as well.
Instead of looking back and getting worried or frightened that you would not be able to make it, try filling the gaps and stop making same mistakes, you will definitely succeed.
3. Remember you are not alone
Remember that you are not the only one who have failed. Many successful people have failed at least once in their path to success. No body is perfect at everything. You have to make your way through lot of obstacles, failures in order to get to that one goal.
4. Don't hold yourself back, be open
Sometimes people fail and they keep quiet. they don't want to share their failures. No body wants to. We always want to boast about our success, our achievements but no one wants to hear about how many times we have failed in order to get to that one success moment.
Be open to discuss about your failures. It will help you as being a true personality. Try saying this 'I achieved, I succeeded' in front of the mirror. Now try this 'I failed, I got up, i succeeded' in front of the mirror. Which one feels better? I am sure that most of you would say the latter one.
5. Tired, look back once again
Many people at some point would say enough now 'I am tired of it, I give up.' This point  steals away all your dreams, your aspirations. At this moment of time, we would recommend all to stop doing anything new. Before going through any next decision of yours (of changing the path of course) try to look back at the beginning. No not the failure but why you entered this business or this relationship.
It will give you some motivation  to keep on trying and hold it from getting away so easily. This way you will be inspired to learn more, fo more and eventually succeed.
Do share your success stories in the comments section below. we would love to read them and share them.