Congratulations, you are hired! 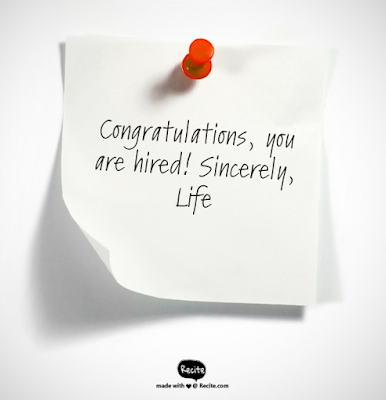 It's very evident that what one does is somewhere of no use at all. So what causes one to sacrifice a large part of learning which took almost every corner of the brain in assimilating? What's the use of that effort then? Nothing! That effort is simply a past time? I am not pretty sure that it would be used even once in life time or not but yes, it's definitely a waste if not used at all!

After so much struggle in educating oneself, years of extreme hardship (mental torture I would say) in studying a lot of things, the same person has to go again through a lot of struggle to be employable. Are you kidding me? During hiring process, a lot of chaos goes through the person's mind. But it all depends on the person who is conducting the interview! Haha, that was all about it? An obnoxious feeling takes over the person who is sitting there, waiting to be judged. All of a sudden, that one person who has nothing to do with you, knows nothing about you, is the one who will decide your future! What does the mental torture has to do if at the end one has to impress a bunch of people who are completely unknown?

The roots lie in the person's life when he is born. Firstly he is allowed to do what he pleases. Then the freedom is seized when he grows up. This happens with almost everybody. From taking admission first time in school to marrying someone, one has to justify at every step of life. The worst part is that one has to do that in front of persons who have nothing to do in their life.

“Even god doesn't propose to judge a man till his last days, why should you and I?”
― Dale Carnegie

One has to study what they have not longed for, have not hoped for, are not willing to do, are doing the same. What it takes for a person to educate oneself so that he is eligible to sit in an interview, 18 years of hardship and in how much time he is judged in an interview? 18 minutes! (Just an estimate)

One of my friends went to give an interview recently. He sat there, trying to impress the interviewer. The interviewer sat there, not listening to him, but instead thinking about his own self. The interview was over within ten minutes with a note from the interviewer, "How can you get a job with just two years when it took me almost eight years of experience?" What a point raised by the interviewer, wow! It seems that this person was not sitting to take the interview but to vent out his own frustration on the potential candidates.
There are two possibilities according to me. Either he was not aware about what he or the company was doing or he was not sure of what he expected from the candidate (which is somewhat related to the possibility one). The people are getting tired, fatigued. Why? The answer is hidden in the below mentioned quote.

“Our fatigue is often caused not by work, but by worry, frustration and resentment.”
― Dale Carnegie

Now comes the point when people want to reach a position, or want to get hired and fake their skills. What will happen if one gets hired and not able to work because of no skill? The career will come to a halt! I respect a point in the book I once read titled "The 48 laws of power by Robert Greene" that boss is always right. But does that mean that he is right for you? He is right for himself and his organization. The simple logic to understand this is to know the fact that he is the owner of the company, so he will do what he thinks is good for the company. So what seems right to him, doesn't necessarily seem right to you. You have to follow blindly what he thinks is right. There is also another trap here. Just think about it that way. You are hired by the company and not by the any person. So you have to work for the company and not for the person! If you make yourself aware about this, you will not follow blindly!
Then comes a person's own character. It's severely damaged by criticism. I have been a victim of it, almost everybody is a victim of it. They say that you take the criticism in a healthy way, I agree to that. But someone, somewhere gets hurt by it. That someone is one's inner self.

“Criticism is futile because it puts a person on the defensive and usually makes him strive to justify himself. Criticism is dangerous, because it wounds a person’s precious pride, hurts his sense of importance, and arouses resentment.”

I remember an instance which happened with one of my friends during an interview. He was rejected in an interview after he answered about sixty percent of the questions. The final statement of the interviewer went this way, "I would give you a zero for that!" Wow! I would applaud for that, not out of the kind words, but because I pity for such people!. I have a question for the interviewer, "The skill for which you called me, was not invented by you, you will never be perfect in that skill, you don't have that experience to judge the person sitting in front of you, then how can you give a zero to the one?" I bet, if I would have been there, I would have asked that person a mere two questions with a guarantee the answers to them he wouldn't have known, then I would have given him a big zero :D

"Applause is a receipt, not a bill."
- Dale Carnegie

It's very difficult to choose a path which one desires, wants to be in but it takes just a step to take one ahead! That path will often be a lonely one (as the other paths have lot of them). Even the ones who you feel to be closest to, will not be at your side. But if you keep on walking, those people will be in front of you one day, cheering! And you will not be a surprise to you. The choice of walking is yours!
Finally, in the end I would like to let you know, that choose a life rather than letting life hitting back hard on you and saying, "Congratulations, you have been hired!"