How forcing others to trust you is slowing you down!

Forcing someone else to trust you is like rock climbing with a  weight that is 1000 times more than you can pick.
- Saurabh Chawla

Most of you would agree with the above said statement as you may have encountered with the same at one point of your life. The above is especially true in the workplace scenario when its very difficult to get yourself through the management or I should precisely say, the boss. In a nutshell, I am not going to provide the ways of doing that but I would be glad to share the fact that whether you should invest your time and energy (which are very useful resources if used at a right place) or not. 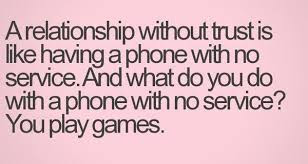 Some of the below mentioned scenarios may make things clear.
1. Your manager is not willing to listen.
We all have been in this situation or maybe some of you would face it in near future. Not once, twice but most of the times. The problem is not him, but the problem is the fact that his superiority has given if superficial ego which is the end result of the role and experiences he is in. The outcome is that whatever you will say, he will try to cut through your points by his own points giving lame reasons of doing this or that making you realize that whatever you do, you are inferior to me.
Now forcing such a person to trust you or believe your work is seriously a mere waste of the useful resources I talked about because no matter what you do, you are nothing but inferior to him. These points he will not let you know about when you want to hear them but he will take opportunistic time and  will blow you off with his thoughtfulness about you. The problem lies deep in human behavior that 'I was not able to do it, how come this junior guy did it.' Exactly, the ego come in the way he plays Satan, the devil.
2. Whatever you do, boss doesn't give a damn!
Obviously the boss is the one who is giving you a paycheck every month and he judges you on the basis of the your performance. But throughout the entire tenure, he will not see the dependencies you have been adhered to and if they don't work out, your performance automatically reduces exponentially as they are directly proportional. You will not get the hike, not even the credit because of the dependencies created as in their eyes you have done nothing.  After all, the company is his, not yours.
Making them believe in you again is the waste of the useful resources which if used in right direction may yield better results. This especially is true when you have to do it every time you take action.
3. Your colleagues laugh at you.
The people out there can get picky at times. The worse happens when they pick you up and make a laughing stock of you. Whenever you try to prove yourself to the manager or boss and get rejected, you are laughed at by them. You will often hear these, 'I already told you that it's worthless.' Some of them are genuine supporters but some really laugh at you be it at your face or behind your back.
4. Employee biasing is the norm.
You are facing biasing attitude from your manager or boss. It's not indifferent to face employee biasing, but it will hamper your productivity as it will hamper your thinking and it will create negative vibes for your colleague as well as for your manager making it even more difficult to prove your point to them.
The worse thing would be that you are doing more work, but the other one is not any work. But still he is good chap an you are nothing.
Now, coming back to the point that why I picked this topic for today's blog post is that these things happen most of the times when you fail to believe yourself that its going to work at all. You are not fully sure about it and straight away jump at the management to believe you. The result, they are not impressed.
Then comes the way when you believe in all this but still you are not getting things through. In this case, I would suggest to give it a try but after some time if it's not working out, then its nothing you can do but to invest the time and energy in other things. This will help in two ways. Firstly, it will prevent you from feeling miserable. Secondly, you will harness the learning in some other endeavor.
After working for many years in a company and still you are not heard or you have done nothing, then it's not your fault (well sometimes it is) its something lacking in others. Either they are not interested in you or they are not interested in learning something new and growing. The end result, you get tired of all and decide to change your direction.
It's really difficult getting someone to trust you but I would recommend that if you are not getting, the indication is that you are at the wrong place. It would be better to invest your valuable resources at the place where they actually should be. At the end, I would like to share the line I love:

Life moves too slowly to hold you down....- Audioslave, Getaway car

I guess I have made my point. Instead of running here and there and trying to justify yourself in front of the wrong ones, keep moving on and justify in front of the right ones. Trust, me you won't regret it.