Do your own deeds, let people do theirs! 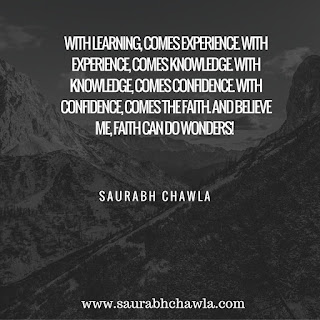 It happens all the time that people stop themselves from doing whatever they want to do. This particularly happens when they are under influence of other people around them. Our parents, siblings, friends, peers, relatives, colleagues, it can be anybody. Life is about experiences. Experiences are different for everybody. Like the fingerprints, no two persons can have same experience.

One of the things that affects people the most is the insecurity nowadays. Be it a relationship or job or studies, everybody is insecure today. At least, I have felt this myself. People are very much afraid of losing someone or something nowadays. That's a natural human tendency. The worst is, under the influence of other people, they stop doing what is actually intended, in fact needed. Today, I am writing on the same. I just want to convey a simple message that one should do what they want and what they feel is right, rather than not doing it because of the reason of what people will say!

Have you ever thought why people stop you from doing what you want? Next time when you meet someone or feel that someone is stopping you from doing something, just wait for few minutes and think of the possible reasons. One of the situations can be in the office. One of the posts I shared earlier also. You can read the posts Congratulations, you are hired! and When I decided to quit and move on.

Whatever the case has been, I have always felt a sense of insecurity, jealousy in other person's intent of stopping me from doing what I was doing. Except for the parents and your siblings, every person will have it in them. It's not necessary that they would be aware about it. Knowingly or unknowingly, they will advise you, guide you, create obstacles for you and do whatever they can, but they will make it sure that you are always preoccupied.

The next important thing is your confidence. If you are confident about yourself, then no one, I repeat, no one will be able to pull you down or convince you to stop doing things which you want to do in life. The best example that can be seen when it comes to confidence is in the job. I have experienced it and you can also see it from the posts above. People want to leave the job and move on, but still they are bound to stay in the same job. That's not because they can't leave it but they are not confident about their own selves. They are not able to believe that they are capable of doing what they want to do.

Once you get in the job, you are bound to stay as they want you to stay. All sorts of politics will be planned against you. Competition will be born.  The best part is that sometimes people who claim to have much more years of experience would be more insecure or jealous from your way of working or your good performance.

This will, at a point of time, force you to leave it and search work somewhere else. It's the insecurity, jealousy, ego, arrogance which stops you from doing the things which you really want to do. The people will, however will stop you always. The notion behind this is that, 'I was not able to do it, how can he do it?'. Instead of this, one should start doing the same or learn the same and try to stay ahead rather than planning the opposite.

One thing to always keep in mind is that whatever is destined to happen, it will happen, no matter how hard you try to stop it. There are several thousands of such instances to state here. The point here is not to stop doing what you intend to do, but think of it the way, 'let them do what they want, I will do what I want.' Once this is clear in your head, you will stop playing the blame game, you will invest more time on doing the things rather than thinking of why you can't or why you shouldn't do it.

Another fact is that you can't change anybody's perception. If you closely look into your own self, nobody would be able to change your perception of seeing things your own way. We all live under the same skies, but we all see it through different eyes. As I stated earlier in this post, not two people will have exactly similar experience of the same situation. There is no law, no definition of experience.


I recall a recent incident while writing this post. One of my friends faced a serious issue in his organization. He decided to stay quiet though. The incident that happened was that he was scolded by his senior and was warned strictly that he will not be given any of his relieving documents by the HR department. To build a mountain of his fake ego and arrogance, he even claimed that he will make sure that my friend will not be able to get a job outside and his career will be ruined. I listened to him intently and what came out of me is quoted as, 'First of all, he is not anything himself. He is not the owner in his current organization, he is not the owner of you. Your life was going on without getting a job in this organization, it will go on still after you leave the organization.' To this, he agreed fully. I continued, 'Now, what all I feel is pity for the poor guy who thinks that life is dependent on mere piece of paper and he behaves like he owns you! Haha :D.'

You decide and  let me know if there is something I said wrong here. What people are scared of is their so called majboori. Once you take out this word from your dictionary, you are all  set to go. People will always say, 'majboori ka fayada uthao.'  What they are not aware about is that you would also be having some so called majboori at some point of your life. What will go through your mind if someone takes out benefit from your majboori? This hinders the person to do what actually is intended by his own self and he starts living the expectations of the others.

The bottom line is that obstacles will be there. People will create them for other people. But remember one thing, some people will also create stepping stones for you to climb and reach the peak! Stay with them and do your own deeds. For other people,  let them do what they are doing. If you are true to yourself, nothing can go wrong. Just have confidence in yourself, no one will be able to say that you are a loser!

One of the quotes I love the most is shared below:

No one becomes a loser till the time he loses from within!