Consistency is the key, my friend! 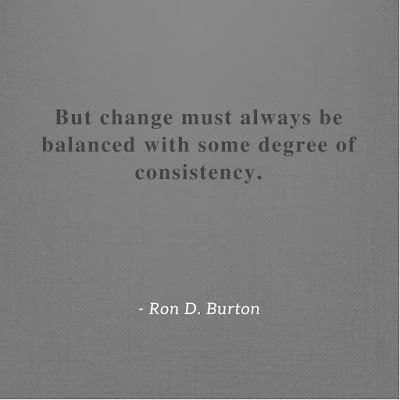 Abhinav stood still on remembering his life; last 10 years have been wonderful. Although somewhere something was missing. Lately, he had incurred losses to which he couldn’t hold somebody else accountable. Relationships with his peers, even his wife were deteriorating. Everywhere around him was tension that was building up every second he thought about the loss.

Sitting in his cabin in his lavish office, he leaned forward. He started banging his forehead with his fists, a sign of worry. He wanted to put back the broken pieces of his life together anyhow for which he was willing to pay any price. As he leaned back reminiscing the happy times he spent with his family, a smile crossed his lips momentarily. He poured some water from the beautiful silver jug placed meticulously on one of the edges of the table. Silence was so eminent that he could hear even the slightest of the noise.

He gave a small glance at the clock on the sidewall, the time was 1 AM. He realized that he had been there for maybe ages. Every hour was close to a decade for him. Past memories haunted him, even the ones which enlightened him, excited him. A vacation with his family in the Maldives, an acquisition of a start-up which increased his reputation as well as bank balances and yes gave him a handful of enemies too! What went wrong?  This thought was the only one clouding his mind crushing every other thought that crossed its way.

Something is really wrong. I can’t let it all go so easily. Suddenly a flash of lightning happened. It blinded him for few minutes. As he opened his eyes, he saw his self reflection in front of him. For a moment he thought that he is not alive anymore. He saw a projection of his own self. He didn’t believe what he was seeing with his own very eyes. Soon he heard the projection saying to him, “Don’t be afraid, I am your own reflection.” After a few seconds of pause he heard the projection again. “I am here to guide you, to solve your problems at once.

Abhinav stood still like a stone. The projection continued talking. “Do you remember what you have been doing when you were in happy times?” He gave him a glimpse of his life. He could see his marriage, the birth of his first child, his new home, his vacations, awards et al. The projection continued, “Now remember what you were doing that helped you achieve all this material happiness?” A word reflected front of him. The word was Consistency.

“Yes, you were consistent in your approach,” the projection went on, “whether it was your health, wealth, relationships, business et al”.  “As you gained significantly, you drew more into your comfort zone. You started enjoying your life as is.” The projection continued, “You started ignoring the opportunities that came to you, you neglected the needs of your family, you became ignorant of your competition, you lacked strive to get more and more out of your life which you had earlier.”

Abhinav heard all like a good listener the ability of which he had lost a way back. “All this has happened because you lacked consistency in your approach.” “If you want everything back n its own place, start working again from scratch, but this time, and make sure to be consistent, because at the end, consistency is the key, my friend.” Those were the last words that Abhinav heard as he saw the projection disappeared.

That was an eye opener for Abhinav. He could now see his life back on track. From that moment onward, he got his zeal back. He gathered all the papers that were scattered on his table. As he assembled the papers, he could see the broken pieces of his life being put together beautifully.

Following are the five points that can be deduced from the life of Abhinav:

1.       Don’t go into comfort zone too soon as you achieve something big. It takes time to build a palace but destroying it takes an explosion.

2.       As you move on in life, be a consistent listener. Awareness about what’s happening in your life around yourself is always trying to tell you something. Listen and act accordingly.

3.       Always keep an eye on your needs as well as your family’s, if you have one. As with your own responsibility, you have to take care of them too. So don’t neglect your health at any cost.

4.       Don’t be afraid of small failures/setbacks. They are there for a reason. They are trying to tell you that something is not right in the approach you are taking.  So change the approach, don’t drop the idea of pursuing the task at hand all together.

5.       Last but not the least, once you find the right way of doing what you want to do, be consistent in your approach. Once you lose the consistency, everything will fall out of place.

What's your take on consistency? If you feel that I missed something, do feel free to share in the comments section below.  I look forward to read your precious comments.

Disclaimer: The story is a work of fiction. The characters, the setting is an invention of the author's mind.