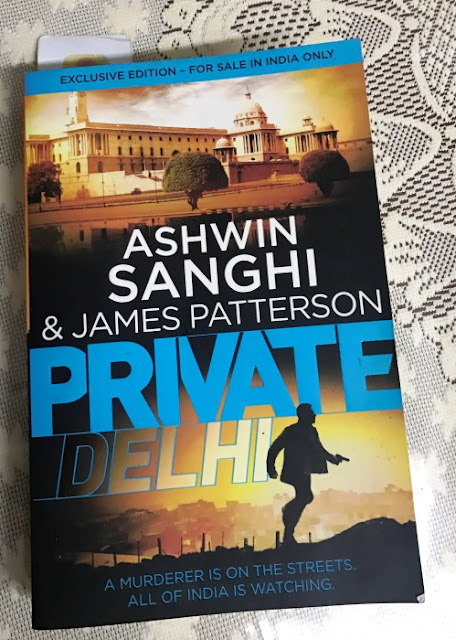 
After reading Private India, I was eager to read Santosh Wagh's and Jack Morgan's next, Private Delhi. When the two master thriller writers, Ashwin Sanghi and James Patterson join hands together to write, then it's almost impossible that the book will not be an exciting read.

The book which is sequel to Private India

revolves around Santosh Wagh's next spine chilling case which involves government as well. People are getting murdered gruesomely and with the higher authorities involved, the information which is needed is hard to decipher. With this, How the cop who was once the head of Private India, Santosh Wagh, will find the criminal?

The story begins with a gruesome murder with human remains being found in the basement of a house the posh area of South Delhi. The suspicion and real thrill is when the politics and the state government is also involved in the matter.

The plot will take you through the journey of murder, corruption and kidnapping. The book also gives you some nail biting experiences as well.

Then the murders go on and these are not simple murders but brutal ones. Santosh Wagh is assigned the task to find the serial killer on the loose. As eh story unfolds itself, a lot of excitement, suspense and intrigue will take its course as the secrets of some high profile individuals in the capital are unfurled.

India's Dan Brown, Ashwin Sanghi and James Patterson, UK's one of the best writers in the genre have done a remarkable job in the sequel to Private India

. Both the writers have weaved a story which is sharp, crisp and exciting to read. The narration and flow of the plot is smooth and well planned. Also, the vivid description of places with the wonderful description of the sounds, smells and emotions of the people are something which will allure you to read the book.

I would rate the book 4/5 for the intrigue, smooth language, and nice flow of the plot.