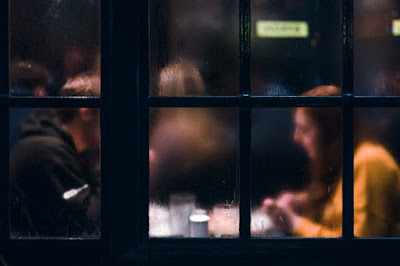 I was standing outside the Italian cafe, waiting eagerly. A few drops of sweat were prominent on the forehead. Probably the humid weather was to be blamed. It could have been curious as well. It had been almost five long years since I had met Ananya.

I saw her standing at a distance on the other side of the road. She crossed the road to reach the cafe. A small tuft of hair accentuated the pretty look. Her flawless frame could turn many heads to see her.

She greeted me with a smile and apologized for the little delay. Out of the anxiety, I didn't bother about her being late. All I cared at that time was how I would be taking it forward.

We took the corner table. I wanted to avoid the crowd at all costs. We were escorted by a very courteous waiter. He made us sit comfortably and left. A lot of silent looks were exchanged between me and Emma.

A lot had changed in our lives since we had last met. She looked different physically. Age had turned her skin slightly dull. Dark circles under her eyes clearly depicted lack of sleep. She always loved to work. She loved to be overburdened by work. I constantly nudged her not to take much stress but failed to impress her.

Emma sipped on the water and gave a little smile. Maybe, she wants me to start talking. Finally, I broke the silence.

'How are you, Ananya? Long time!'  I asked as I placed the glass after taking a sip.

'Yeah. I am good. How are you? Where have you been all these years?' In the meantime, the waiter came to take the orders. As a regular visitor, I knew that I would be taking the Ai Frutti di Mare Pizza, my love for seafood. I was not surprised by her order. She ordered Pizza ai Funghi e salsiccia, just as I expected.

'Love for mushrooms still?' I winked to ease the tension.

She smiled. 'Yes. You remember?' She seemed surprised.

'I still remember the risottos, the pizzas, the Spaghetti, you liked a lot of Mushrooms.' I said.

'And yes, olives too.' You love them on your Pizzas sometimes. Don't you?'

'Are you trying to flatter me?' She asked as the waiter placed the pizzas on the table.

'Like I used to do?' I was just curious to know what was going on her mind.

She remained silent for a while. 'I know you were secretly after me.' I had a strong doubt about it.

'Don't you still have the doubt?' I felt at ease as the conversation was progressing.

'I do. In fact, I know you secretly love me now as well.' She said.

'Then why didn't you give an indication that you knew?'

I was taken aback by her reply. I decided to go deeper. The intrigue was building in me.

She continued. 'I wanted to see how far you would go.'

'So, did I go till you wanted me to go?' I straightaway jumped in between cutting her next sentence she was about to speak.

'If you want to know the truth, yes, you did.' She was telling the truth I could see that in her eyes.

'Then why didn't you come with me?' I was getting impatient now.

The conversation was going on an interesting turn. I was getting excited now.

'You remember, I told you that there is something that I will tell you after leaving college?' She said without blinking her eyelids.

'Yes.' I pretended as if I remembered. The fact was, with time I had forgotten this.

'Well, I guess the time is now.' She wiped her mouth with the napkin and pushed herself back on the chair.


Photo by Jack Finnigan on Unsplash