Why fear your own shadow? 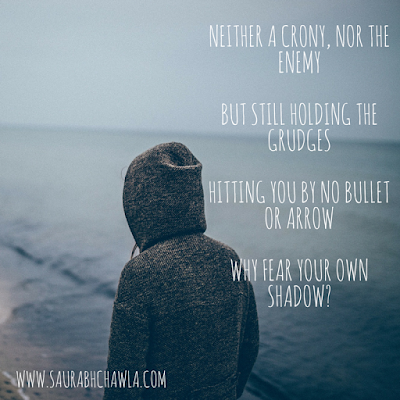 The day started well with beautiful sun spreading its bright rays. Despite the hot sun, the weather was pleasant as it was marked by a zephyr in irregular intervals. Aaliyah was relaxing the sunlight in the lawn of her house. She was in her twenties. Aaliyah had a lean but curvaceous body with sharp facial features. She wore a maroon-white robe with gilded border that comfortably housed her lean frame. She sat there sipping the hot coffee she just prepared. It helped her soothe the sporadic headaches she was suffering since few hours.

Vivaan, who was Aaliyah's fiance had been murdered a week back. The incident that gave sleepless nights to Aaliyah. She was also in the list of suspects as it was believed that she had tryst with some one the night before Vivaan was brutally killed, something which was completely denied by her. The ghastly incident took a toll on her mind. She could still remember how she saw the deceased Vivaan for the last time. Her father dissuaded her to not get disturbed too much. She has her entire life ahead of you. I will search for other suitable man to be a part of her life soon! The words echoed in her ear as she once overheard her father talking to her uncle after Vivaan's demise. For a moment, she was hysterical, the other moment she thought like her father. Maybe he was right. Vivaan is gone now, but I have to live my life. He also would not like to see me unhappy. I have to live for him.

A sudden noise forced her to come out of the momentary delirium. Before she could realize, she saw someone drive away in a black sedan. To her consternation, her car was gone. The instinct provided the remaining impetus and Aaliyah stepped inside the house. "Dad! Dad!" She screamed on the top of her voice. When she heard nothing, she sped towards her father's room which was at the left end corner. She stepped inside and saw the stone-like lifeless body of her father ensconced at one of the corners of the room. The last thing she remembered before falling unconscious was her own scream along with a verse written on the mirror:

You can read the next part Dim Haze of Mystery