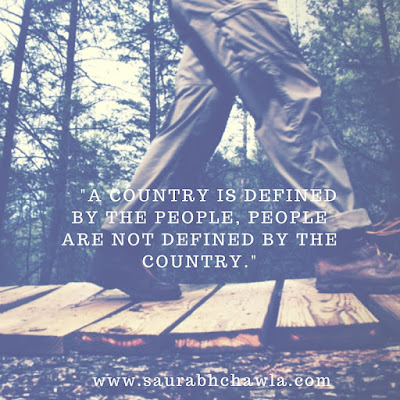 Intolerance has been growing in the recent times among people. The exact reason for growing intolerance is still unknown. Being a part of democratic republic, it's high time now to bring stability in the highly volatile environment. With this the confusion that is inextricably surmounting which would ultimately lead to nowhere.
People are talking about empowerment, lowering the crime rate and so on but all this have just been a part of the propaganda till now. A country with diverse and versatile culture, the eruption of differences is somewhat inevitable to some extent.

If people are united, country is strong, if they are separated, country will break down into small unkempt pieces. People of a nation define the core values, the true essence of it. People are the true strength of the country. there is a thin line of difference between thinking about something and to believe in it. But the most difficult part in India is that most of the part in people's lives is played by the Amygdala. The tolerance level of the masses in India has gone down significantly. There is an air of confusion lurking around. The benefit of all that is going around is that there has been an increase in awareness among people.

Along with the awareness, there has been a groundswell pattern of insecurity among the people.  There is silent debate about the limited freedom given to people. However, this inexplicable silence is taking the toll. The main problem is that we, the people are not allowed to speak up. This is very well said by Anoushka Shankar too. If people in our country don't speak up, their voices will soon be lost deep enough from where it would be close to impossible to dug it out again. Time is running out faster than expected, and if something needs to be done, it's now!

Recently there also has been a wind of Award Wapsi with lots of famous celebrities returning their awards in response to growing intolerance. The situation is not getting improved but it has defamed the country. The respect, the honor, the respect these awards hold in them is being defamed. We all need to come together to solve the problem. These kind of acts will only add fuel to already burning fire. These kind of acts only demonstrate the egotism of the doers.

It's the time to bring out the unexpected, to speak out the unspoken. We are secular people, now it's time to show this to the world that we are!

Disclaimer: The views expressed in this article are authors' own and are not intended to harm any person, religion or community.