If you have been tired of being in noise for quite a long time, you are not alone. There are lots of people out there suffering from the chaos this noise has created in their lives.

The usual sources are there which are deemed to make noise but some sources are introduced by forced means. One such source which we would be discussing today is unnecessary honking on the roads. 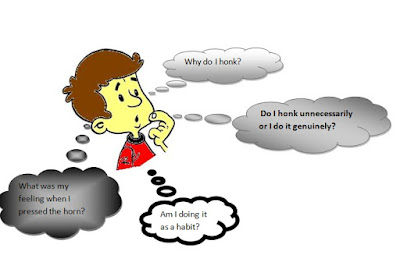 Why do people honk? Let's get back to this question later on. Before thinking on this question, give a deep thought to the questions below. It's better if you could ask these questions to yourself:


Simply write down answers to the questions above. What do you observe?

Coming back to the reason why people honk, let's discuss possible reasons which I have felt people who honk on the roads, why they do it:

Accept it or not, honking on the roads has become a habit that  has no end. People are so obsessed with the honking that even on the traffic signals they are tempted to honk even though the signal is RED.

Have you come across a person honking outside someone's house in a residential locality? I bet you must have come across someone like that. They don't do it because they are just waiting for a person to step out of the house or for fun, it's because of their bad habit of surrounding themselves in the noise.

The thing which they forget is that honking is prohibited in residential areas, near hospitals, near schools. But there is no respect for the laws.

Have you see the cases of road rage personally? I have seen. Someone had a fight at home. Someone just got fired. All these frustrations, anger, feeling of sadness etc are negative emotions. People hide their anger, frustration under the noise of the horn.

This happens because after facing such situations, the world, the people living around appear negative to them. The fact is that they never changed, they were the same since the beginning. The only thing that changed was their point of view about other people.

Even when the people are happy, they honk! Consider a bus driver or a truck driver rhyming a tune of  a popular song  using horns.

The best way is to take a public transport to avoid such a temptation of honking under the influence of some temporary feeling.

A lot many times people might have felt that there is sudden increase in traffic and there is a strong urge for honking. The myth is that the traffic will be cleared by honking – the truth is exactly the opposite.

The traffic will be cleared out by moving and not honking. If this simple concept is digestible by the people, noise pollution can be reduced significantly.

Have patience, hold on and keep moving slowly. Everything will be sorted out at its own pace. Honking unnecessarily will only cause more trouble.

You might be thinking that what it has to do with honking. But there is a big problem when people don't follow traffic rules.

People take sharp cuts, they overtake from the wrong direction and the rule which is violated is being on the wrong side of the road, entering a 'no entry zone' to be precise. It will obviously cause people to blow horn unnecessarily.

With the rising use of smartphones, people are getting equally dumb at the same time. They are hooked to the mobile phones on roads, while taking a bus, on the stairs, everywhere.

The worst time is while driving. It not only slows them down by distraction but also irritates the person behind them waiting for him to move on. When they don't the honking starts!

One of the valid reasons which was said by Gunjan Bagla and published in Forbes Magazine's Article holds true for Indian drivers:

“Honking gives every driver the belief that somehow they will mitigate the risk of a collision.”

Honking is not bad but doing it unnecessarily and pointlessly is awful. It will hamper the  concentration power of the mind and can severely damage the ears if exposed for long duration.

Already the air pollution and water pollution are adversely affecting people's health in India, adding on to it by noise is  like digging our own grave.

With this post, I would like to direct the concerned authorities to keep a check on the noise levels and several measures to be taken to eliminate the bad habit of honking among people.

Next time you see the caption behind any truck, simply keep in mind one thing, 'Horn OK, No Please!'