How your habits can influence your goal's success.

By Saurabh Chawla May 01, 2016
Let's face it. We all have goals set for ourselves but seldom we can achieve all of them. Have you ever figured out the reason for the slack? We often get entangled in different point of views, digesting a lot of information, even sometimes more than we can digest even. We set a goal but after two or three weeks we give up on them. What factors influence our actions which led to giving up on our goal? 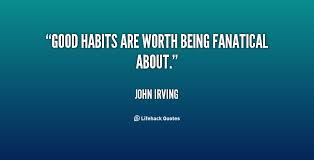 Below I would be discussing few factors which I feel and some which I have found out after reading from the internet from various experts giving their point of views:
1) We don't get out of our comfort zone.
This is the number one factor which I feel that is a reason behind us slacking in achieving the goals. Here I would like to quote a very good explanation which I read in Jack Canfield's book '25 principles of success'. It said that if we take an example of a baby elephant who is taught to stay tethered to a pole will stay there only. In his younger years he is small, so he can't force break the rope, but it has been found that even if he grows bigger and stronger, he still doesn't even try to break open the rope.
That elephant was taught to stay in that zone only, which he accepts as his comfort zone. He is unwilling to get out of that zone. Similarly, we are taught since our childhood days, more or less the same thing from our peers, friends, family members etc. We get nervous when we try to force ourselves out from our comfort zone.
Solution: Most people get this wrong. They jump out very fast without giving time to their minds to adopt to the sudden change. I am not saying to get out of your comfort zone at one instant, but you can do it slowly and gradually by making small changes to your daily routine. Or body and our mind adapts to the changes around us, so it will adapt this change as well. Just give it a try to see the results.

'Imagine that if a chocolate bar is placed in front of you while on the other side a bowl of freshly cut fruits is kept in front of you, what would you pick first?'

2) Keep your focus steady
We always jump into many things at one time. The result of which is of course loss of focus. We try to focus on many things simultaneously which leads to all the goals being unfulfilled. Similarly, for the habits, we have to focus on one habit first. We have to build that habit in ourselves, make it stronger and then move on to the next habit which we need to incorporate.
Solution: Try to focus on one habit at a time and look for the results. I used this habit philosophy while studying a tough subject, while writing my blogs, while exercising to stay fit, to change my attitude etc. on the daily basis and for several other instances in my life. But I started doing it from one habit at a time. Try to build it by following one habit at a time.
3) We don't commit to our goals
We always try to take things easy. Sometimes, one has to be hard to himself/herself. This needs full dedication and full commitment from your side. We commit for some time, but after that time, we give up. This leads us to return to same old habit structure which we followed.
Solution: Start taking the habits seriously and be fully committed to its development, till it's hard-wired in you. Avoid any distractions whatsoever that hinders you  to succeed in acquiring that positive habit.
4) Temptation is always towards the bad side
Imagine that if a chocolate bar is placed in front of you while on the other side a bowl of freshly cut fruits is kept in front of you, what would you pick first? Most of the answers would be 'The chocolate bar' (This is just an example.) Such temptations always lead in lot of slip ups making it harder as well as longer to reach that goal. The solution for this also I have written below.
Solution: Reward yourself. If we take the same case above, promise yourself a chocolate bar after eating that bowl of freshly cut fruits for, say three weeks. But please check on the quantity consumed. Don't make a fake promise of 3 chocolate bars after having fruit bowl for a week! Try to kill the urge for few days and you will see for yourself that the urge is no longer  felt.
5) Small failures make us negative
Failure is something inevitable. If you fail for the first time, don't change the goal, but try to change the way you approached to the issue firsthand. We often notice people leaving the goal or habit because they couldn't make it for the first time.
Solution: Failure is nothing to worry about. You are not alone who has failed. There are many out there, who have seen darkness for a long period of their lives. They didn't give up and now they face the brighter side of life with a broad smile. Make it a habit of never giving up. You won't regret it.
These small changes in your daily approach and thinking will help you to adopt that habit which you always longed for. Remember, stay positive always. Drop by drop a bucket is filled with water. Daily, small changes in your habits philosophy will be of a significant value later in life.
So start today. pick up one of your bad habits and start changing it from today onward.
Featured image credit: here